Happy New Year  to you all and welcome to this edition of Herbs, Healing and Health.

For those of you with an interest in such things, 2016 adds up to a 9, which, in the world of numerology, signifies love and care for the world at large and global consciousness. In these times of global warming and ecological concern, the plant world offers a marvelous opportunity to focus our energies and our intent on healing, both personally locally and globally. I will take this opportunity to quote Stephen Harrod Buhner here on the nature of plants:

Thinking of plants as ecological medicine helps us to gain a different perspective on their ability to heal, and to extend our focus beyond our own concerns and out into the complex network of life supported on this fantastic planet that we are privileged to call home. So lets engender a bit of biophilia with our use of plant medicines: a love of and caring for all life using plants as our conduit, and our own healing journeys as our path.

Lonely as a cloud

I am writing this on a grey damp morning, the kind of weather we have all become very familiar with over the last month of so. The earth is sodden and heavy, and I find myself having great admiration for the geophyte plants, the bulbs, that are having to force their way up through this dense cold soil. Many people have commented that they have been seeing daffodils appearing unseasonally early in their gardens, some as early as the beginning of December. 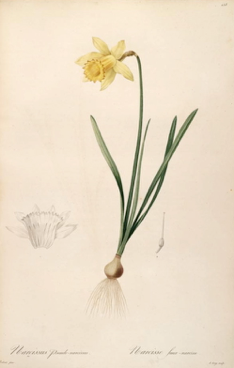 Most likely due to the unusually mild weather we have experienced until now. Daffodils have always been amongst my favourite plants, with their nodding heads, happy colours and lovely scent. Before I go launching into a discourse on the medicinal properties of daffodils, I must state that they are basically poisonous and should not be used in any form as an internal medicine. That said, the poisoning cases reported over the years are rated as mild, involving stomach ache, nausea and vomiting, and are self limiting, lasting from a few hours up to three days. They are usually the result of the bulbs being mistaken for onions, so remember, if it doesn’t make you cry, don’t eat it! I did actually come across a story today of a student who entered an exam knowing he was going to fail, so he ate a daffodil bulb before sitting down to the exam paper, causing him to vomit within half an hour and so be able to retake the exam at a later date without losing face! Gerards Herbal (1636) suggests applying the bulbs, mashed with honey, externally to ‘the great wrenches of the ancles, the aches and pains of the joints’. Also that they ‘consound and glew together very great wounds, yea and such gashes and cuts as happen about the veins, sinues and tendons’. [2]  Unsurprisingly, given its poisonous nature, there is scant literature in modern herbals relating to daffodils. Allen and Hatfields excellent book, Medicinal Plants in Folk Tradition, could find no folk uses for the wild daffodil, stating that the use of daffodils as an emetic in Donegal was probably referring to naturalized or garden cultivars. Scientific research however, is ongoing concerning a number of compounds with potential therapeutic benefits, including the alkaloid galantamine, (also found in snowdrops) which possesses acetylcholine esterase inhibiting properties, and is used in the treatment of Alzheimers disease and vascular dementia, and a lectin which may be used as a marker to identify the early stages of cell death and therefore treat inflammatory states before they become serious.

In the early 1950’s a Bulgarian pharmacist happened to see some inhabitants of a remote village rubbing their foreheads with the leaves and bulbs of the snowdrop plant. Thus galantamine was ‘discovered’.[3] This brings us very nicely back to Stephen Buhners earlier quote, about the knowledge of use not being held in the hands of a few experts, but being diffused through the cultures that use them.

Appropriately enough, huge fields of daffodils have been planted in the black mountains in Wales by a research company called Alzeim, with a view to optimizing galantamine production. The daffodil has been recognized as the national flower of Wales since at least the mid 1800’s as its flowering season begins on St Davids day, (the patron Saint of Wales). A less well known fact is that Prince Charles is paid an annual rent of one daffodil by the local environment trust for untenanted lands on the Isles of Scilly.

The daffodil is well represented in Greek mythology. When Persephone was captured by Pluto she was wreathed in white daffodils which apparently turned yellow at his touch. The river Acheron, one of the five rivers of the underworld, was aid to have daffodils growing on its banks, which delighted the spirits of the dead. The custom of planting daffodils on graves springs from these legends, as the grave is Pluto’s domain. [4]

Finally, I couldn’t write about daffodils without of course mentioning that beautiful boy Narcissus.

Greek legend tells us that Nemesis, the Goddess of revenge and retribution, punished his heartless rejection of the nymph Echo by causing him to fall in love with his own reflection and pine away. (Well – we’ve all been there!)

So when you enjoy your lovely daffodils this spring, think of the hidden health benefits contained in the bulbs of these lovely plants, and also the pleasure they bring us (whatever our plane of existence apparently). They are more than just pretty faces.

So now onto more practical things. I thought that I would share with you a few simple ‘onion tricks’. Onions are pretty useful things to know about at this time of year. They are antiseptic, antibiotic, hypotensive and cholesterol and blood sugar lowering. Not bad for such a humble vegetable. They are also readily available at this time of year. Raw onions particularly are a good liver tonic, something of particular benefit after the excesses of the christmas season. Think of them for sore throats, colds, catarrh and sinusitis. Their antiseptic qualities were put to good use during world war 2 to dress wounds, and their properties were so valued by the ancient egyptians as a cure all and a symbol of vitality that oaths were sworn with the right hand placed over an onion. You can use onion juice for burns cuts, boils, abscesses and as drops for earache. Grated onion is good as a poultice for chilblains or applied to the head it may relieve migraines in some.[5] Use your onion!